Workshop on Foundations and Constructive Aspects of Quantum Field Theory

We are happy to welcome you to the 46th edition of the series of workshops on local quantum physics.

If you have any questions regarding the workshop, please write to lqp46@math.fau.de.

For those participants that arrive already on Thursday, feel free to join an informal dinner at Entlas Keller where we will gather from 8pm. This is a beer garden which also serves basic food, within walking distance from the city center.

Accommodation options can be found at www.erlangen.info/lqp46/. Since other events are going to take place concomitantly in the area, we recommend booking your accommodation in advance.

More details will be announced in due time.

The event will take place at Bismarckstrasse 1a (not at Mathematics or Physics building).

Registration is still open. Please use the form below to register.

From Nuremberg Airport one can easily achieve Erlangen’s main station by taking Bus 30, which stops just a few meters from the airport’s exit and has its final stop either at Arcaden (which is just two blocks from the city centre) or at the Bahnhofplatz (which is the city centre) depending on the time.

The event is at a walkable distance from Erlangen’s main station, but for those who may need a bus, we suggest by now Bus 290. 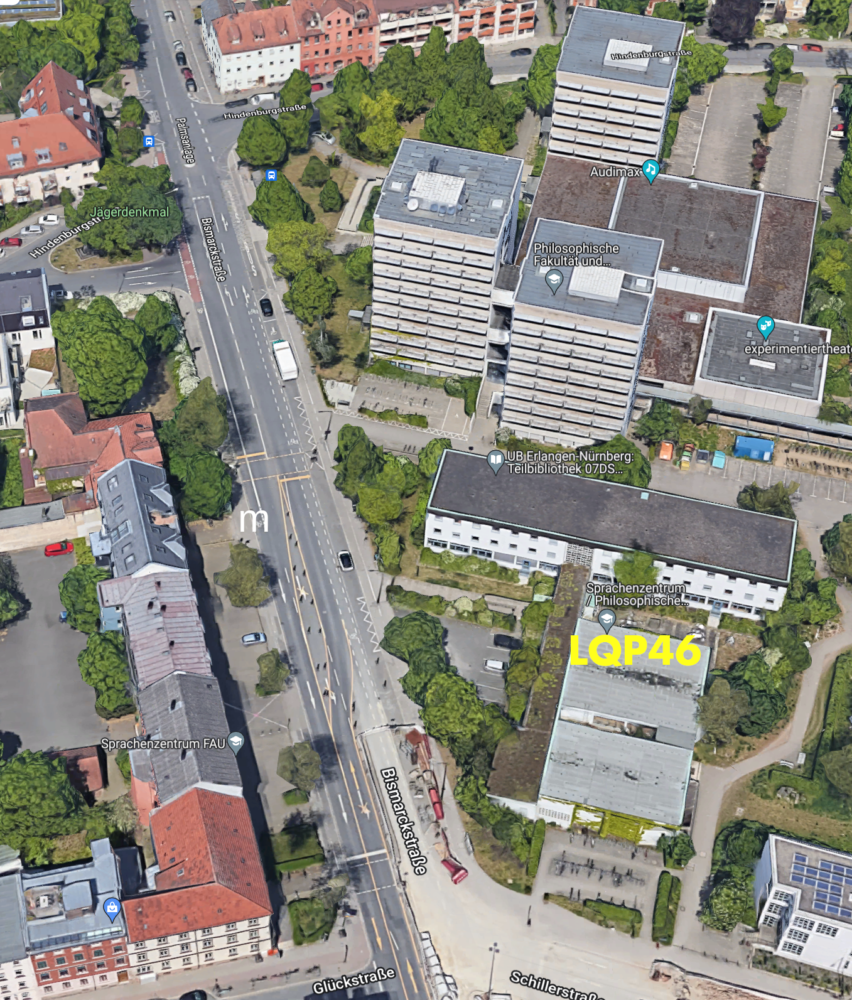 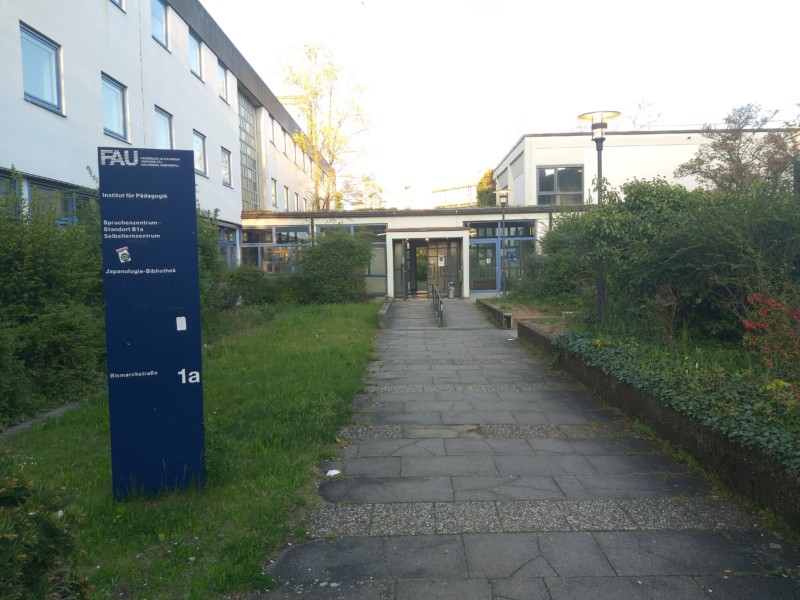 For our dinner at Restaurant Römming on Friday, most of us will have a nice walk through the Schlossgarten from the event building to the restaurant. For those who need a bus, the best option is Bus 293.

Restaurants and Cafes Nearby

There are several options of restaurants and cafes nearby the event. In particular for the lunch on Saturday, we can mention a few options to help you:

The geometry of modular groups on local nets

We consider a net of algebras of local observables on a manifold M on which a finite-dimensional Lie group G acts by symmetries and fixes a common cyclic separating vector for the local algebras. We further assume that one of the modular groups obtained from the Tomita-Takesaki Theorem is contained in G. This assumption has surprisingly strong structural consequences: the generator of the modular group is a so-called Euler element.

As Euler elements can be classified and are closely related to causal symmetric spaces, one can now start from Euler elements and construct natural causal G-manifolds on which nets of local algebras can be constructed. We also characterize the domains (generalized wedge domains) for which the modular groups can be identified.

Abstract: We consider the algebras generated by observables in quantum field theory localized in regions in the null plane, in particular null cut regions. For a scalar free field theory, we will show that the one-particle structure can be decomposed into a continuous direct integral of lightlike fibres and the modular operator decomposes accordingly. For this model we also compute the relative entropy of null cut algebras with respect to the vacuum and some coherent states and discuss QNEC.

Construction of the Unruh state on Kerr-de Sitter

The study of quantum fields on curved spacetimes can reveal interesting physical effects, such as Hawking radiation in black hole spacetimes. The derivation of these effects requires the choice of an adequate Hadamard states for the quantum field theory. For the scalar field in Schwarzschild spacetime, one possible choice is the Unruh state, which has been shown to be a good approximation for the state of a scalar quantum field arising in gravitational collapse. In this work, we show how the Unruh state can be generalized to scalar fields Kerr-de Sitter spacetimes and prove the Hadamard property for this generalization.

This talk concerns an infravacuum representation introduced by K. Kraus, L. Polley and G. Reents. It is not equivalent to the standard vacuum representation of a massless scalar free field on the Minkowski spacetime. But for subalgebras corresponding to measurements performed within double cones, restrictions of respective representations are quasi-equivalent. This means that the representation is locally normal. We give a straightforward proof of this fact which is based on the Araki-Yamagami criterion.

Using this result we extend a recent approach to superselection theory, based on relative normalizers and conjugate classes, to a relativistic setting. The talk is based on arXiv:2106.02032, to appear in Lett. Math. Phys.

Abstract: The Wetterich equation governs the renormalization flow of the effective action under a scaling of an IR cutoff k. In this talk, I introduce a generalization of the Wetterich approach to scalar field theories in generic, Hadamard states on globally hyperbolic, Lorentzian spacetimes, using techniques developed in the perturbative Algebraic Quantum Field Theory framework. The main novel ingredient is the use of a local regulator, which preserves the local covariance and unitarity of the theory. As a proof of concept, I also briefly discuss the application of the theory to thermal states in Minkowski space and to the Bunch-Davies vacuum in de Sitter space.

As an example of integrable system, the classical sine-Gordon model exhibits an infinite number of conserved quantities, which are moreover in involution with respect to the Peierls bracket. The goal of my PhD project is to understand to what extent this structure is preserved in the setting of perturbative algebraic quantum field theory, considering the expected appearance of anomalies for the corresponding quantum sine-Gordon model and in view of previous results on the convergence of the scattering matrix.

In QFT the total entropy of a state is generically infinite, so one considers the relative entropy between two states with reference to a subalgebra of the observables, such as the von Neumann algebra associated with a double cone or a spacelike wedge. Such entropy can be computed using Tomita-Takesaki modular theory.

In this talk, we study the relative entropy for a subalgebra of a generic CCR algebra between a general (possibly mixed) quasifree state and its coherent excitations, and give a formula for this entropy in terms of single-particle modular data. We also investigate changes of the relative entropy along subalgebras arising from an increasing family of symplectic subspaces, and study lower estimates for the second derivative of the relative entropy along this family, which replace the usual notion of convexity of the entropy. Our main input is a regularity condition for the family of subspaces (“differential modular position”) which generalizes the notion of half-sided modular inclusions. Examples include thermal states for the conformal U(1)-current.

On the Relative Entropy on QFT in globally hyperbolic spacetimes

Abstract: Is reviewed the interesting case that the computation of Araki relative entropy for QFT may be obtained from the classical theory on one-particle space, through a formula due to Roberto Longo. Then applications to the Klein-Gordon field are discussed, both in Minkowski and in globally hyperbolic spacetimes. In this latter case the result is obtained by introducing peculiar regions that produce, under admissible Killing flows, half-sided modular inclusions of local von Neumann algebras.

Starting from the requirement that a theory shall describe “observables” and “operations”, I will analyse the structure of AQFTs, i.e., of nets of local unital *-algebras. Haag and Kastler’s original interpretation of AQFTs was in terms of nets of local operations, i.e., every appropriately normalised element induces a quantum operation via its adjoint action. This view will be shown to be challenged by an investigation of signalling causality in a scenario due to Sorkin. Instead, I will show that putting the emphasis on regarding the Hermitian algebra elements as observables suggests that associated local and causal operations reasonably have a structure close to that of a time-orderable prefactorization algebra of Benini, Perin and Schenkel. For additive AQFTs I will give a concrete example of an associated net of local and causal operations that in particular contains the update maps derived from the measurement schemes of Fewster and Verch. Finally, I will argue that Buchholz and Fredenhagen’s C*-approach may then be regarded as specifying a net of (pure) local and causal operations, followed by finding an associated AQFT generated by observables.

This talk is based in parts on work together with H. Bostelmann and C. J. Fewster.

Abstract: Many results in general relativity rely crucially on classical energy conditions imposed on the stress-energy tensor. Quantum matter, however, violates these conditions since its energy density can become arbitrarily negative at a point. Nonetheless quantum matter should have some reminiscent notion of stability, which can be captured by the so-called quantum (weak) energy inequalities (QEIs), lower bounds of the smeared quantum-stress-energy tensor. QEIs could be proven in many free quantum field theory (QFT) models on both flat and curved spacetimes. In interacting theories only few results exist. We are here presenting analytical results on QEIs in interacting integrable QFT models in 1+1 dimension, in particular a state-independent QEI for the case of a constant S-matrix and for a class of models at 1-particle level including the O(n)-nonlinear-sigma model.

Quantum Theories and their Classical Limit: a C*−Algebraic Approach

Quantization refers to the passage from a classical to a corresponding quantum theory. This notion goes back to the time that the correct formalism of quantum mechanics was beginning to be discovered. The converse problem, called the classical limit of quantum theories, is considered as a much more difficult issue and forms an important question for various areas of modern mathematical physics. As opposed to most traditional methods where one typically aims to obtain quantum mechanics from classical methods, this talk is based on quantization (more precisely, deformation quantization) as the study of the possible correspondence between a given classical theory, defined by a Poisson algebra or a Poisson manifold and possibly a (classical) Hamiltonian, and a given quantum theory, mathematically expressed as a certain algebra of observables or a pure state space. On the basis of this understanding quantization and the classical limit are two sides of the same coin.

In this talk I will present these ideas, first by introducing a natural framework based on the theory of C*−algebraic deformation quantization. Subsequently, I will show how this relates to the classical limit of quantum theories. More precisely, the so-called quantization maps allow to take the limit for h̄ of a suitable sequence of algebraic states induced by h̄-dependent eigenvectors of several quantum models, in which the sequence typically converges to a probability

measure on the pertinent phase space.

In addition, since this C*-algebraic approach allows for both quantum and classical theories, it provides a convenient way to study the theoretical concept of spontaneous symmetry breaking (SSB) as an emergent phenomenon when passing from the quantum realm to the classical world by switching off a semi-classical parameter. This is illustrated with several physical models, e.g. Schrödinger operators and mean-field quantum spin systems.

Entanglement is ubiquitous in quantum field theory, as can be seen e.g. from the Reeh-Schlieder theorem. However, QFTs also admit separable states between any two spacelike separated regions. Such separable states are important: when we want to quantify the amount of entanglement in a state, we essentially compute a kind of “distance” to the “nearest” separable state.

Abstractly, the existence of separable states follows from the split property, which also shows that such states are normal. However, little more is known about such states, even for free scalar QFTs. E.g., can separable states be Hadamard and have a finite energy density?

In this talk we consider separable states of a massive free QFT in Minkowski space. We develop some new mathematical tools to construct separable states with as many of the following desirable properties as possible: quasi-free, Hadamard, stationary, homogeneous and isotropic.