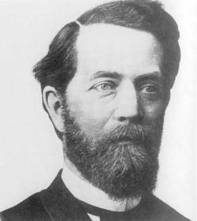 Felix Christian Klein (born 1849 in Düsseldorf) received his doctorate as early as 1868 in Bonn from Julius Plücker with a topic from line geometry mechanics. He then attended lectures by Leopold Kronecker in Berlin and took part in the seminars of Ernst Eduard Kummer and Karl Weierstraß, where he also met Sophus Lie, with whom he went to Paris for a study visit in 1870 and was a friend. Due to the Franco-Prussian War he returned to Germany. He was habilitated in Göttingen in 1871 and was offered a professorship in Erlangen in 1872. His further professional path led him to the Technical University of Munich in 1875. In 1880 Klein was appointed professor of geometry in Leipzig. His most productive period as a scientist fell during the Leipzig period. Thus he corresponded with Henri Poincaré and at the same time devoted himself intensively to the organisation of teaching. This double burden eventually led to a physical breakdown. In 1886 he accepted a call to Göttingen. Here he focused himself above all to scientific-organisational tasks. Klein died in Göttingen in 1925.

Klein in Erlangen: When Klein was appointed to Erlangen in the winter semester of 1872, he already belonged to the most important representatives of 19th century geometry and had, for example, worked on projective geometry, Plückers line geometry and noneuclidean geometry. His scientific program is still known worldwide as the Erlanger Program.
It is based on considerations of Klein and Lie and represents a systematization of the different geometries known at that time. Thus the euclidean and the noneuclidean geometries were put into a common context with the aid of projective geometry. Klein considered groups of transformations of the plane or space on themselves. He assigned a geometry to each group of transformations, under which certain geometric properties (such as orthogonality, parallelism) remain invariant. In this way he created an ordering system for the previously known geometries. Klein’s model of the noneuclidean (hyperbolic) plane consists of the points of the open unit circle E in the plane as points and the tendons of E as straight lines. At the age of almost seventy, Klein worked his way into Albert Einstein’s general theory of relativity.
He was particularly fascinated by the discovery of his Göttingen colleague Hermann Minkowski that there was nothing else behind the special theory of relativity but noneuclidean geometry, one of Klein’s favourite topics. He was also inspired by the emerging application of group theory in physics, particularly by a theorem by Emmy Noether on the relationship between symmetries and conservation theorems, the NoetherTheorem. Klein was also very interested in the applications of mathematics. He dealt with framework and other applications of geometry in mechanics and worked with his student Arnold Sommerfeld on the theory of the gyro, about which they wrote a four-volume standard work. Felix Klein was also involved in mathematics didactics. He demanded the strengthening of spatial comprehension, an education in the habit of functional thinking and the introduction of the infinitesimal calculus as a compulsory teaching topic, which was not implemented until 1925.