In energy-efficient timetabling, the aim is to bring the following three targets into balance:
– the choice of energy-efficient velocity profiles of the trains.
– increasing the the utilization of recuperated braking energy.
– limiting peak power consumption.

This project builds on previous experience of the chair in the design of energy-efficient railway timetables. In a joint cooperation with Deutsche Bahn AG, we have derived efficient model formulations and decomposition schemes to compute timetables which limit peak power consumption by avoiding too many simultaneous train departures. This includes approaches to maximize the use of recuperated braking energy by favourably synchronizing the departures and departures of the trains. In a later project with VAG Verkehrs-Aktiengesellschaft Nürnberg, we have derived extensions of the methods to include the choice of energy-efficient velocity profiles of the trains.

The next target will now be to make the above methods work in real-time, which represents a significant and ambitious step forward. It means that an optimal control of the train departures in the stations and the velocity profiles on the tracks shall occur in real time, realized via a driver assistance system. The mathematical methods we use for this purpose are based on mixed-integer linear programming, which enables the inclusion of logical constraints as they are prevalent in timetable optimization. In our work, we thus aim to resolve the following challenges to algorithm development:
– Optimization of the velocity profiles of a train: For the non-linear differential equations governing the driving behaviour of a trains, we develop efficiently solvable linearizations which allow for the computation of velocity profiles in real-time. They are continuously updated and communicated to the driver in the form of an assistance system.
– Forecasting of traffic situations in the railway: As a basis for forward-looking driver assistance systems, we develop algorithms of machine learning and data science which allow to extrapolate the local, short-term history of traffic flow in the vicinity of a given train. These forecasts form the basis for a globally coordinatedd optimization of the driving behaviour of the trains.
– Globally coordinated optimization of the departures and velocity profiles in Germany-wide railway traffic. In order to become utilizable for the 30,000 trains operated in German railway traffic each day, we derive efficient algorithms for the solution of timetable optimization problems under ressource constraints. In order to make them solvable in real time, we conduct dedicated polyhedral studies and develop branch-and-cut algorithms based on their results. Furthermore, we derive stochastic extensions of the underlying models to incorporate the short-term traffic forecasts from the prior step. This allows to make the computed timetables robust against disruption in traffic flow.

The overarching aim is to create a driver assistance system which incorporates a combination of artificial intelligence and mathematical models for energy-efficient train control. As a perspective, we aim to develop these techniques further to make them the core of a future autonomous train control system. 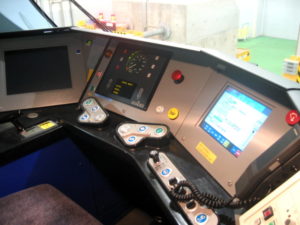